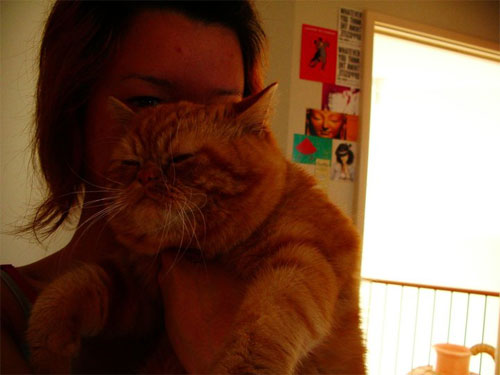 Before my family moved to Australia, we had dogs and cats. I wasn’t close to our dogs and even though one of our cats was ‘mine’, I wasn’t close to him either. It’s only been in the last 5 or so years that I’ve really understood what it means to keep a cat – that you don’t; the cat keeps you.

Tigger was the first cat in my responsible, grown-up era of cat company. He was a ginger Exotic Shorthair, flat-faced with a real personality about him. It was rare for him to meet a human who didn’t find him a bit special in some way. We lost him last year in a car accident; a very sad day.

Seb was a blue British Shorthair, a real momma’s boy. I never considered myself maternal in any way until Seb. We lost him when I moved to the city – he was saying with my folks and got out. It wasn’t until a few days later that I heard what happened and by then, it was too late to search for him in the area. I think he might have gone back to my old place, saw we weren’t there and found a new home. Or perhaps he died and we never found out.

Today, it’s just us and Dora, a tortie British Shorthair. Our first nine months with her were… interesting. She was petulant, responded in ways we didn’t understand. She was like a child or childish adult who hadn’t yet learned good manners. She’s now a little over a year old and quite lovely – very communicative and settled in. Really loves the company of humans.

Over the course of raising three cat children, I’ve noticed certain things they do that didn’t strike me as particularly cat-like – or at least what I thought was cat-like. I’ve been inconsolably pensive this week, what with holidays ending and many new year opportunities to worry about not fucking up; thought I’d take a time out with a cuppa tonight and think some lovely cat thoughts. 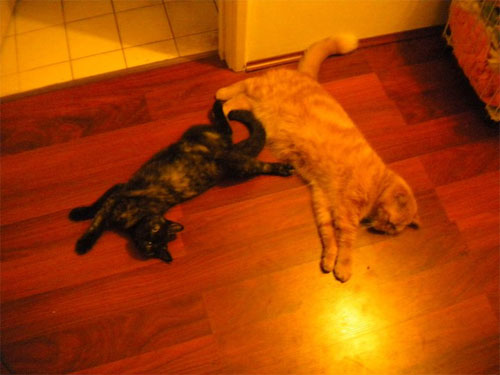 In order of my being able to remember, here are 10 things my cats do that changed the way I think about cats: 1. Sleeping on their backs – legs in the air, belly exposed. A couple of friends remarked that he’d never seen his cats do this, but all of mine have. I like to think it’s because they feel safe, and cos there’s a lot of space to stretch out. **2. Sleeping on their belly like a person – with front legs by their side, paws pointing towards their feet.**I’m sure a lot of cats sleep this way, but I noticed for the first time Dora doing it last week. My partner sleeps that way too and the coincidence-loving part of my brain likes to imagine that she picked it up from him. 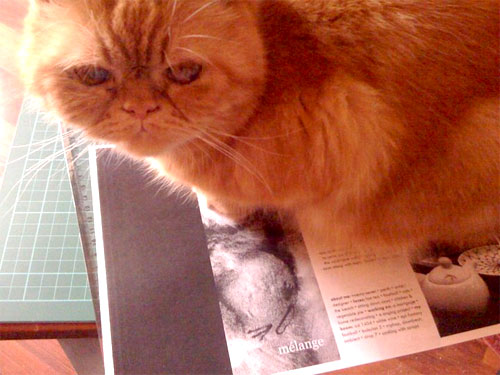 3. Tolerating pats and hugs while eating. Maybe all housecats do this, I don’t know. I imagined it would be different in the wild, where a lurking neighbour would only try to get close for food stealing. I love it when my cats purr while they eat. I wish I could do that too. Especially at the ramen shop on a rainy afternoon.

4. Asking for attention. I mean really asking! If we’re upstairs and Dora wants to play downstairs, she’ll sit at the bottom of the steps, toy in mouth, and screeeeeeeeeaaam for us to come and play. Not exaggerating. Tigger would chit-chat when he wanted food or cuddles. Seb used to strut in when I got home from work and talk like I understood what he was on about. I had always been told that cats sleep all day and are aloof to their humans. MYTH BUSTED. 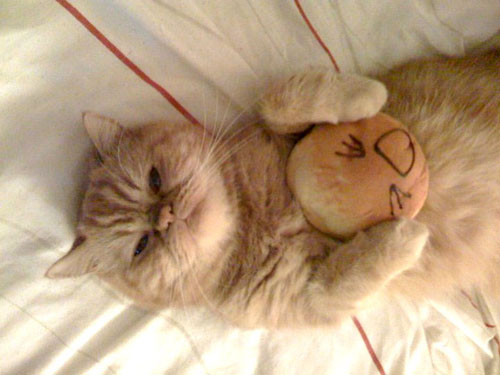 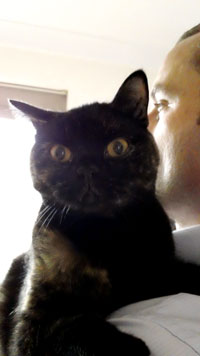 5. Posing for photos. Forgive me for anthropomorphising, but I find it uncanny the way Tigger and Seb used to hold perfectly still when the camera was out. Moving only to change poses so I could take another shot.

They probably had no clue what was going on, but somehow realised that doing what we humans call ‘posing’ would get them lots of smiles and pats. Dora has recently started to pose for pictures, as you can see in this shot.

Promise not to teach her the duckface. :)

I always knew cats like cosy places, but didn’t know they could be so overt about it. If you had a box or bag lying around, Tigger would find a way to try it out and then let you know all about it. 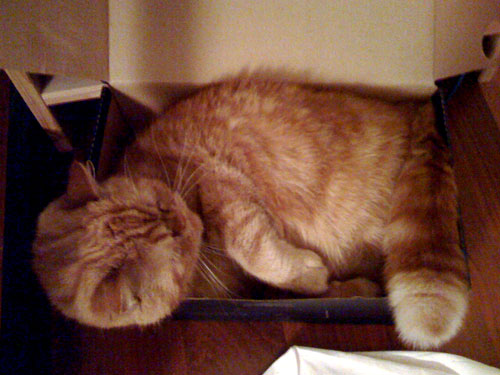 7. Listening and understanding plain English. OK, I’m probably really projecting now, but there have been specific incidents where I would ask Seb or Dora to stop doing something, and they’d stop. Maybe a well-timed coincidence, but you know… when it happens often enough, I can’t be too closed-minded about it. 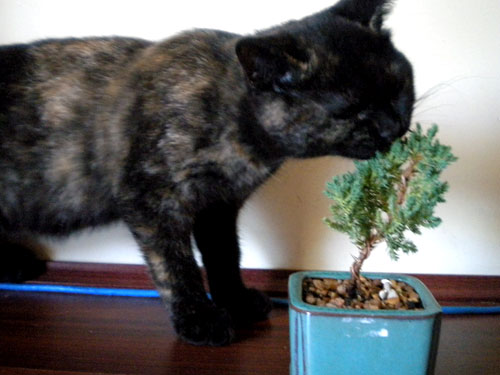 8. Preferring rubbish over toys. You know that joke about giving a child a fancy gift only to find they’re more interested in the wrapping paper? It’s like that. i thought my pets would be more impressed by colourful, tinkling toys but no – their firm favourites have always been old plastic bags and scrunched up receipts. This, I hope, isn’t a “like owner, like pet” situation. I am not a rubbish lady.

9. Eating vegetables. One time, I left some freshly cooked potato chunks in a bowl. Came back 2 minutes later to find Seb chowing down on what was supposed to be my dinner. This was well before I knew that some cat foods have vegetables in them. I guess potatoes have vitamins and stuff, but seriously, Seb? Potatoes instead of the hearty kangaroo mince in your dish? I’ve thought about preparing food for Dora the way you’d cook for a person. Maybe one day when I learn more about cat nutrition. 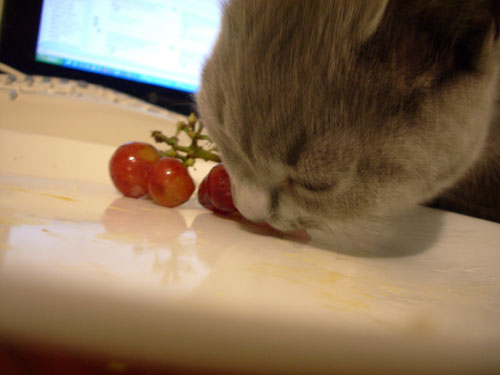 10. Refusing human food. Perhaps I mistook cats for hungry dogs. When Dora turns her nose up at human food, I wonder if she can taste something preservativey and unhealthy in my meal – especially when it’s heated soups and stews from a can. Tigger was curious enough to have a sniff and a taste, but also showed little interest in processed food (except for ham).

I’m sure every cat marm likes to think of their cat as a little human in a fur coat. I fancy that too sometimes, when my mind wanders to strange possibilities. But cat or human, we’re all just animals really, making a comfortable life around each other. Finally, to end this catty blogpost, a quote I saw on my friend’s TV table:

“No outfit is complete without cat hair.” 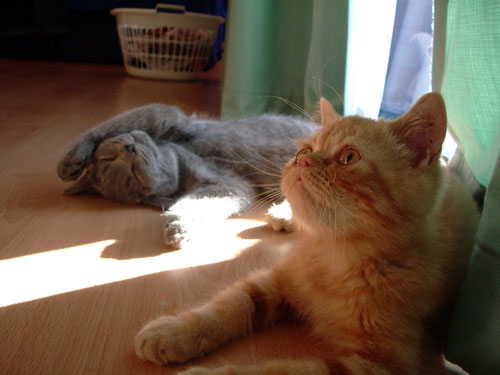