Throughout my clumsy life, I’ve had the pleasure of dealing with many different types of people, and getting to know the different ways they view the world. It’s fascinating stuff for me; I love getting to know how a person ticks, as it gives me a frame of reference for figuring my own head out.

One thing that particularly stuck out with me, which I’m only starting to understand now, is expectation. Expectation of intent, agenda, postulation or some endpoint, and how it affects the way we interpret what’s going on.

For example, say a controversial issue comes up in discussion. You have no firm opinion, but another participant has clear and strong feelings about it. To you, the discussion may be a casual conversation, but to the other participant, it may be a hot debate! They may hold expectations of everyone else being for or against the issue, so everything you say, however neutral or irrelevant, gets treated as agreement or argument.

To a further extent, what you don’t say may get pre-empted by inquisition or defensiveness. If the situation is really out of hand, all you have to do is turn up – or even not turn up – to be considered part of the bandwagon or the ‘big bad world’.

I catch myself doing it sometimes – at sport, at parties, on forums, in situations ripe for creating any sort of stress. My instinctive reaction is arousal (not the nice kind), followed by my brain assessing the stimulus as threat or play, then reacting defensively or pre-emptively.

The more empathic part of my brain that supposes other people must experience similar confusion – it can’t help but -arc up- laugh patiently when I think I see someone else doing it too. It’s like we all unwittingly put on greasy dark sunglasses and treat the world as if it’s blurry and bleak. 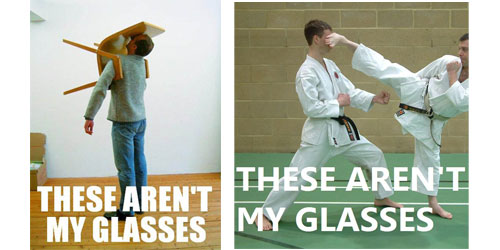 This interpretive behaviour seems very typical, and I’m guessing it has a lot to do with how our species has managed to survive. In the wild, our lives would have depended on snap judgements of whether someone is ‘for’ your cause (to help you live on and eat) or ‘against’ it (to kill and eat you).

It’s ironic, I think; the paranoia that helped us survive creates all sorts of stress and drama that work against a healthy, comfortable life in today’s civilised societies. When trying to be more patient and waiting to understand a situation better, we’re contending with billions of years of evolutionary ‘fight or flight’ instinct.

I remember, a few years ago, having to get work samples off a colleague for a project I was managing. I was so paranoid about having to disturb her while she was working that I pre-empted this by only talking to her in short, sharp bursts so as not to interrupt her flow. Of course, she had paranoia of her own about not being trusted in her job and interpreted my approach to mean I didn’t trust her. It was quite hilarious in the end when we realised how silly the whole thing was.

More recently, I was surprised by a friend who had become convinced that I thought she was superficial and stupid. It caused her to worry a lot about how she appeared, even behaving out of character, order to pre-empt being judged poorly. This really drove home for me just how our expectations can warp the way we look at life around us and have a huge effect on the way we live.

I heard somewhere that our evolution as a species has fallen behind our civilisation and technology. That thanks to writing and agriculture, modern man has convenient means of surviving and no longer needs to hunt, gather, fight or flee. But we haven’t been around long enough for those urges to breed out of our system – we live peaceful, structured lives, yet we’re still a little bit wild inside. In short, our primal instincts are all pent up, making us paranoid.

There’s nothing to be done about anyone else’s expectations; there will always be situations where a person with suspicions or paranoia will act out, even if you’re minding your own business. But one can be in control of one’s own expectations. It makes sense that biologically driven neuroses would make us do things we wouldn’t choose to do if we knew better, and there’s a fine line between being useful and being destructive. Where life or death isn’t concerned, there’s room to wait and see, dissect and understand.

So today, I will be more patient. Patient with other people’s paranoia and with my own.

It’s a balmy Saturday afternoon. I’ve had a lot of sleep and a good breakfast.