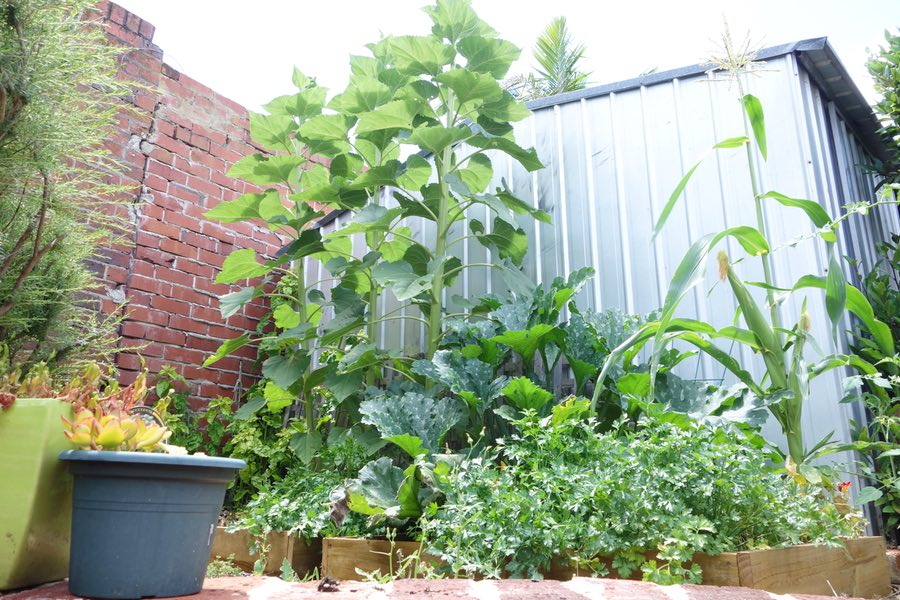 This is what my veggie patch looks like after a growing season (3 months exactly!). Mental, huh?

The flat leaf parsley went crazy. My big mistake here was overestimating how much we actually eat parsley, ie. hardly at all. I've been told tabbouleh is the way to use this all up. Parsley pesto ain't half bad either. There's a chance we won't have that much after removing the crap leaves anyway.

Out of the four corn kernels I planted, three got eaten by something. Probably birds. I replaced them, and only one sprouted, but hasn't flourished. Only the one proud hero stands, bearing two hairy ears of corn. As soon as those hairs turn brown and dead, we'll have our first proper homegrown cob snack.

The sunflowers are crazy tall. Taller than me. Taller than niaalist. Probably taller than if I were sitting on his shoulders. The tops of those giant stalks have buds that look like they'll put out a decent flowerhead. We may have some tasty sunflower seeds to nibble on through summer.

Our spinach was a success. Too successful, in fact. We had more than we found appetising. Don't know if we'll grow it again. We planted a lavender in the middle of them, as a bug repellent. Seemed to work well enough, if we got that many edible leaves, I guess?

After my run-ins with powdery mildew, I thought our zucchini crop would surely fail, but to my surprise, we're getting nice healthy looking summer squashes. We harvested a handful for the last BBQ we went to. Gosh, they tasted so good. We'll be having some tonight in a pasta bake! 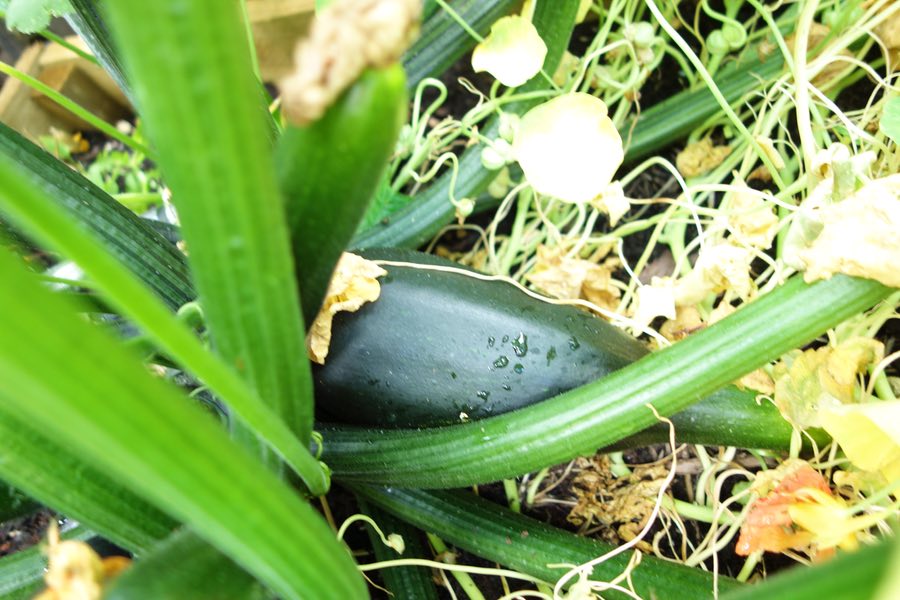 Especially this weird one. The front half looks like a little courgette finger, but the butt is huge like the ones you get at the supermarket. I wonder why it did that, and why it's the only one? 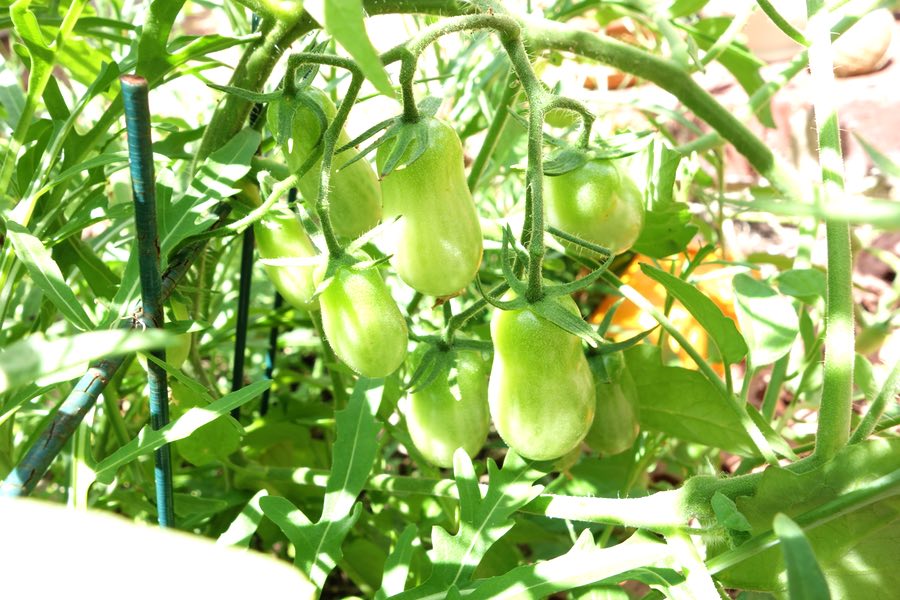 Just outside the veggie patch are a couple of grape tomato plants that seem to be thriving. I didn't plant these. They sprung up like a weed from our worm compost. Yes, we do the dumb thing of letting seeds go in with our scraps. I don't see it as a bad thing. If they're seeds from our food, they'll make plants we're more likely to eat.

I'm annoyed that the tomato plant I actually made a point of planting and fertilising and paying extra attention to is pretty much dying. Balls to that. But I'm excited to actually get some tomatoes out of this season.

It was the same story with basil. I sowed seeds, I fertilised and watered - in the end, the only one that grew and survived was one that sprung up as a weed. Just a couple weeks ago, I did see that one of my deliberately planted seeds has sprouted. It's in the shade of the zucchini plant, so it'll grow slowly, but I expect it to get going as we clear areas of the bed for the next planting.

My many attempts at growing chilli failed. From seed again. Maybe summer will be better for it.

I didn't get any photos of our marigolds and nasturtiums because they're not much to look at anymore. I'd always thought they produced smells that repelled insects, but this didn't turn out to be the case. They seemed to attract the insects that would have otherwise feasted on my herbs and veggies. The nasturtiums were especially distracting, and grow prolifically. The marigolds lasted longer than I thought. They actually kept their delicious heads, where previously, my marigolds would be eaten very quickly by snails. I'm hoping their impending demise will leave seeds that spontaneously spring up next season. Hooray for sacrificial plants! A+ would grow again.

Freelancing has been going well. I am pretty much constantly working my arse off, but we don't call it work anymore. We call it "life choices". :) Today's life choices are newsletter and website copy, twitterature, researching interactive fiction, and another 1667 words on my NaNoWriMo novel. I also hung out the laundry and ate a sandwich. How am I so good.