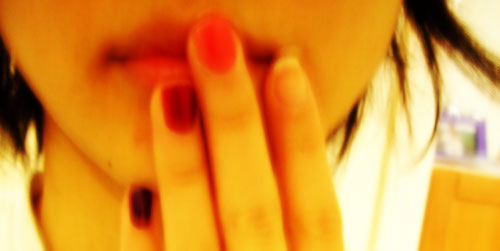 In the intro to A Birthday Song , the poster mentions that her parents were from two different backgrounds and don’t speak each other’s native language. I don’t know many different-language couples – might have encountered one or two while growing up. I imagine it’s rare nowadays, but when marriages were more about business, the bride and groom might not have even had the opportunity to communicate beforehand.

A relationship without common verbal language at first seems restrictive, makes me feel a little claustro-anxious. How could you talk about your aspirations and worries, how could you ask for the exact help you need? Though I suppose that’s still difficult even when you both speak the same language – when you know someone expects (or is expected) to be precise with their wording, you might expect (or be expected) to put less effort into understanding what they mean.

Conversation escapes me. I prefer doing stuff with people – playing games most of all – rather than talking to them, though I’m very comfortable chatting when we’re already doing something. But typically, I don’t have much to say. Perhaps it’s introversion and a little lack of confidence in that what I have to say is really worth the effort of saying and listening. Who’s life do I improve by talking? At least here on the internet, what I reckon can be peacefully accepted or ignored without being in-your-face to anyone.

I’ve known conversations to break down because it was too easy to take the dialogue for granted, lose appreciation for meaning in the flood of words, drag in irrelevant, confusing or over-stipulated factors with slip of the tongue or clumsy phrasing. Based on this, I wonder if we’re a little spoiled by language, spend words like wealth on throwaway trinkets instead of keepsakes. That said, I would find it very difficult to not be able to communicate with words to my partner, even though in principle, all you should ever really need is “I love you” and “FIRE!!”

My cat, Dora, and I never argue. We never converse, but our relationship doesn’t diminish. In fact, it’s probably better she doesn’t understand what it means when I call her stupid and fat, or that I don’t understand if she intends to call me smelly and insensitive. We just put up with each other cos it’s too hard to translate, so we find meaning and reassurance in just sitting beside each other.

Forgive my getting mushy – Dora fell asleep on my belly today while I was on the couch, which she almost never does, and I wonder if that’s her way of saying she missed me when she was at the cat motel. Could a relationship with another human flourish in the same way? It’s a lovely dream for the introvert in me.