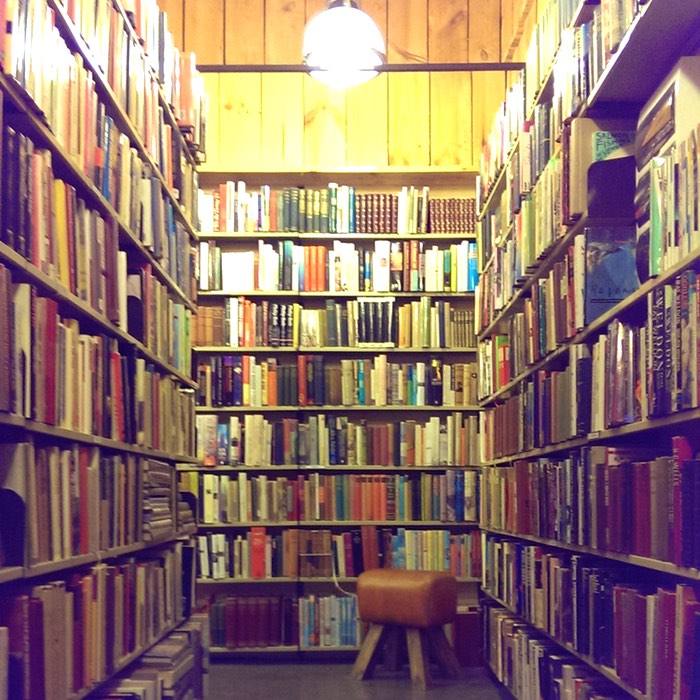 Recently, a friend asked why I blog. I've been blogging since the 90s, so this question comes up a lot, yet it still catches me off guard. I ask myself all the time and end up second-guessing the answer.

This is maybe due in part to growing up in the 'teen domain scene', a period on the internet from 1997 to 2003, which was when I started blogging. We didn't call them blogs then; they were online journals. You were a journaller, or a diarist.

This was before Wordpress, or even Blogger. Think back to Livejournal and Xanga. Then further back to Diaryland. Then even further back to when it was something to brag about if you did it all with raw HTML by hand in Notepad (not even Dreamweaver or Hot Dog), then copypasted, uploaded or FTP'ed your updates online.

And at first, it wasn't even a journal that I kept. It was my site news, where I'd include thoughts and bits of what went on in my life. No archives. Just a page. So primitive.

I don't say this to show you how cool I am, but to give you an idea of the times. We were naïve, exploratory, adolescent webmasters... webmistresses? The scene was very female domainted, which makes me apprehensive about the "shortage of women in tech" problems I hear about today. If you chatted on forums, if you ran your own site, if you had AOL Instant Messenger, you'd connect with hundreds of girls like you, and be part of the scene. The evolution of personal websites in that era mirrored our teenage optimism and drama.

It wasn't actually called the 'teen domain scene' until later, when top-level domains suddenly became affordable and accessible for whomever. Kids my age and much younger were buying domains with stylish names, and hosting their friends. If you were hosted on a private domain (ie. not Geocities, Angelfire, Tripod, etc.), you were regarded in the upper echelons of our society. 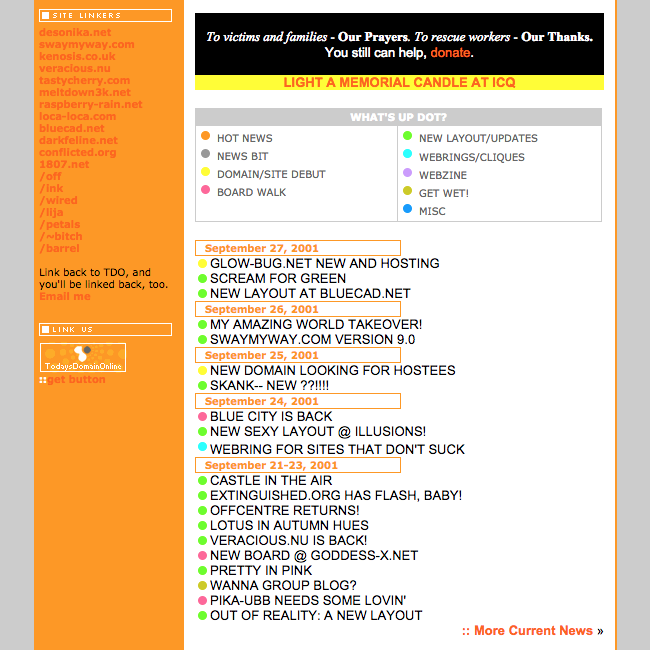 Most of the girls in the scene were into writing, myself included. Fiction, poetry, rants, essays, journal entries, etc. I had favourite writers/webmistresses, who happened to like my stuff and each other's stuff too. Consequently, we kept in contact and linked to each other's sites. Normal, right?

But you know how things go in a crowd full of teenage girls. People started to view us as an exclusive clique. They called us the "inner circle" like we were all super cool best friends who were too good to hang out with anyone else. In reality, I think only 2 of the group were best friends irl. In case you're unfamiliar, 'irl' means 'in real life' - back then, your online life was considered separate to your offline (real) life.

There was nothing special about our group. We just got on, enjoyed writing, worked on our sites, and fangirled over cute boys and girls - never bothering with exclusivity and cliques. At least that's how I remember it.

And I remember when I got invited to a super cool private domain by one of the "inner circle" girls. The owner found it so stupid that a private domain raised your social status, and how everyone made a big deal over who was getting invited and who wasn't. So she registered uninvited.net and invited her friends as a tongue-in-cheek statement that getting hosted privately only meant you had a friend who used dad's credit card that one time. I'm pretty sure we were the only ones who appreciated the joke, but she was a sweetheart so it was FUNNY.

Well, now you see the emotional pressure cooker we grew up in, full of nuance you can only navigate if you're a teenager. So if you imagine the growing trend of publishing your life amidst the angsty, moody undercurrent of youth, you can understand my inner turmoil over blogging.

Because of course if you share anything personal, you're doing it for the attention. And omg if you say something that stands out just a little bit, then don't update for a while, your supporters worry you attempted suicide, and your detractors are scathing in their criticisms. This kind of thing happens to adults too for sure, but as an adult, you're more aware of the alternatives, and more accustomed to your hormones. At 16, 17, even 18, it can be overwhelming.

I don't mean to blame the scene for my insecurities. Just that whatever tendency for self-doubt I started with was surely amplified by these colourful and precarious, very cerebral, teenage years. Some insecurities hang around a while.

Over the years, I've faced cynics who will find negative reasons for everything I do or represent. I've encountered pessimists who artfully suggest I shouldn't share because they themselves don't, despite having "always wanted to try". I've dealt with paranoids and creepers, who think I'm sending secret messages to them in my blog posts. And garden variety snarky types who only ever cluck amongst themselves, so are generally harmless if you don't pay attention.

All this makes me hyper-aware of the consequences of sharing, so I constantly question my motives. If you do A knowing B will happen, does that mean you do it because you want B to happen, or are you only concerned with A? The answer, in practice, can be so complicated and sensitive to context.

I shouldn't be one-sided here. The good experiences far outweigh the bad. People are, for the most part, so supportive. I've had email accounts suspended because they filled up with too many nice messages (thanks, Rocketmail). I've gotten touching letters from young people who tell me they got into art or design because they were inspired by me and my work. Hearing that from a stranger is humbling, a huge wake-up call to try and be more responsible and brave. 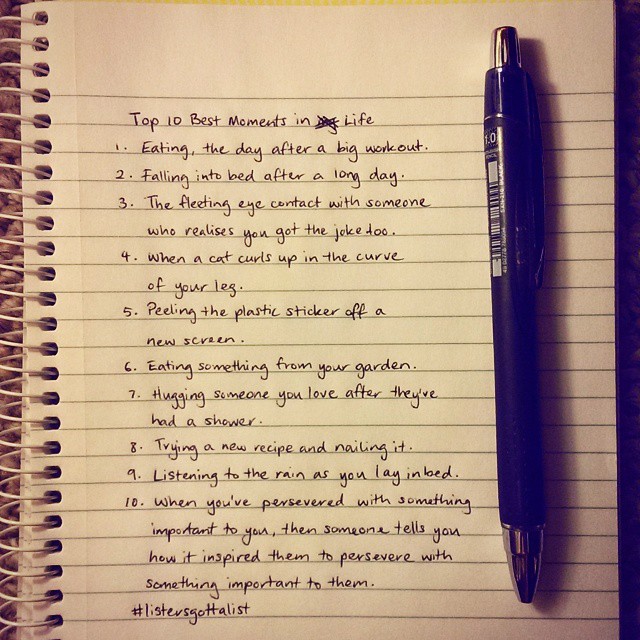 There are practical reasons - practising writing and photography, keeping records, having a point of reference for my hobbies and thoughts, sharing knowledge, etc. And if that's the kind of answer you want, there's no need to read any further. It's all true, and the benefits are useful. I'd encourage anyone, especially creative or thinky people, to blog for this reason. Or at least keep a diary, if you don't like stuff in the public eye.

That's the real question, isn't it - why keep a public blog when a private diary will do? I keep many offline diaries, yet still publish a blog online.

There's this idea that as social creatures, humans are driven toward empathy - that's giving and getting. A private journal gives you a way to express, examine, and crystallise your thoughts away from bias and premature judgement, but it doesn't demand the level of accountability and consideration of things shared with other thinking, feeling individuals. When blogging, the act of creating for a shared space forces me to think about what I'm doing, why I'm doing it, who I'm doing it for, and how I put it into action.

It's not so much presenting only your best self for appearances' sake, though I'm sure that happens too. It's more that I'm always going to be myself by accident, so it's nice to learn how to do it considerately. It's an ongoing project in crafting the self from the inside out.

I also blog because I've been introduced to so many things via other people's blogs - things that made me look at life in new ways, and expand the boundaries of what I believe is possible. I've connected with people who hit the same obstacles I do, and in relating to their battles, I can get through mine. So, sharing is a way to contribute knowledge back into the pool, so others like me can find comfort.

Blogging with these motivations means I'm accumulating a site that is more or less an extension of my self. Which means I have a way to look at myself from the inside and the outside. At the risk of sounding conceited, I do read my own blog, and subscribe to it in my own feeds. I'm not famliar with "know thyself" philosophy, but as a concept and life pursuit, it feels important. I feel knowing myself will help me fare better in the world, fit more neatly into situations, and do right by others without ending up depleted. I blog as a way to contemplate the world and how I fit into it.

This has been a very long blog post on probably the most overdone, most boring topic to blog about. I still prefer to call it online journalling, and it's been part of my life for a very long time. This site in particular is more than a decade old. I ruminate often, and spend much time introspecting - blogging feels natural to me, maybe for that reason. Or maybe it's just habit now.

I get excited when people tell me they've started blogging, or are thinking of starting. In my experience, it's great for re-centering. Some people aren't into writing for themselves, so the presence of an audience can spark self-expression and clearer self-reflection. This is a fast and noisy fucking world, and we all have to make it from birth to death in ways that suit us individually. So I feel happy for people who take on projects that might settle the agitation within.

I do feel guilty about being happy. The innermost feelings of others are none of my business. But I guess if someone puts them online, it means they're OK with sharing. We can connect over very human feelings and moments, as considerate extensions of ourselves.