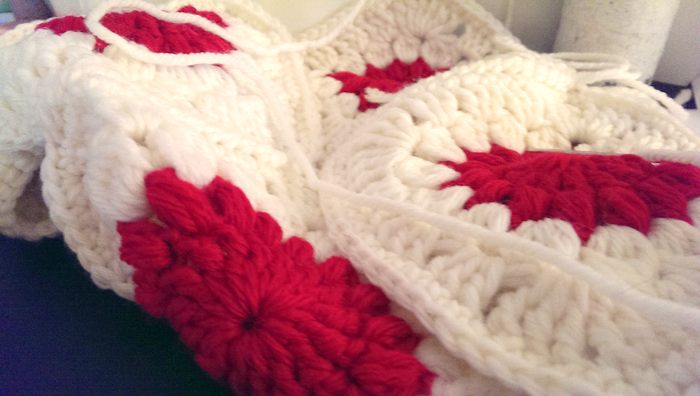 My blanket project from last year grew less interesting with every square. It was meant to be a 100-patch glory for cold nights on the couch. Then cut back to 81 pieces because fuck doing 19 more squares for hardly a size difference. Now it's relegated to being a dog blanket for a Cavalier Spaniel pup we'll be visiting in a couple of weeks. So, that's on the cards - stitching up all 36 pieces, then rubbing my face in it so it smells like me.

Along with this are more half-finished, barely started, and mostly done projects strewn around my desk. Fancy a look?

My first weaving project, using orange and light aqua yarn. I almost gave up on it because the weave was too loose, but then I learned about stiffening fabric and figure I could starch this and make a display piece. That was a month ago. I haven't touched it since.

This felting kit is waiting to be picked up. I'm scared, though. These needles are sharp and rough. I have thimbles, but it's still risky. Something stupid is going to happen. Blood will probably happen.

There's a lot going on in this tiny basket of bits. That blue stuff is a baby kimono awaiting more yarn. The white stuff will be made into a hat. The blue-grey thing is alpaca yarn slowly transforming into a scarf. The red stuff will go towards a neckie. And the orange bits will end up a present for someone in the family.

I had a go at making a Victorian collar - sort of. It's almost done. It needs some buttons, but every night, I cbf.

Throughout my childhood, I wondered what kind of wizardry went into making hats. At some point in my life, I would like to find out, thanks to this book I found at Planet Books. The craft of hat-making is called millenery. It sounds like it requires a lot of steam and glue. However, before I can even think of starting, I have to make a gateway piece:

An apron. This is my cotton drill fabric, calico and a fabric pencil. The book recommends using an apron when crafting, so your clothes don't get smudged or snagged on your hat. An apron is a nice, simple re-introduction to sewing machines and sewing. This will be my competence litmus.

Other projects I can't take pictures of include...