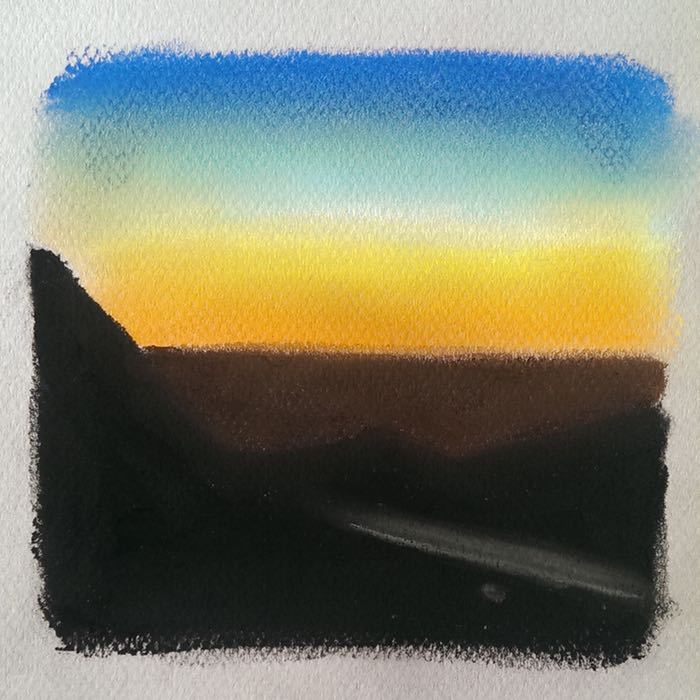 This post isn't what it was meant to be. By now, I wanted to talk about my projects, but I didn't end up doing them.

My next 20 book pledge fanart hasn't been started. I decided on a pastel instead of a sketch, so I've been spending this time learning how to pastel. The photo above is one of my practice pieces.

I wanted to share my pumpkin dish with you, but we still haven't even decided what to make.

And I wanted to talk about the arduino stuff I did yesterday, but woke up so hungover and didn't actually do any. The night before was my last day at work, you see. I felt loved at the farewell meeting, then very loved at farewell drinks.

That was supposed to be a 2-pint night. Oh, the things that could have been.

This job would have been so perfect for the me of 12 years ago - idealistic, in love with code, and immune to hangovers.

The me of today has other dreams, though, and it's time to go chase them. Yes, it sounds romantic, but at the moment just amounts to looking for a part-time job.

This year is my 20th anniversary of being a web person. It's surreal because I don't feel how I expected. I thought I'd be an expert, but as each year passes, I feel increasingly like I don't know my arse from a hole in the ground. They say this happens as you get older - you do know more, but also grow painfully aware of what you don't know.

Since I was a teenager, I worried I'd turn out to be an uncommitted person, so I'm at least proud of having stuck with something for this long, even if I did jump between various sub-disciplines. Sometimes I think I would feel more expert-ish now if I had specialised, but that never worked out. I need the variety of multidisciplinary work.

I'd like to think you can specialise in being a generalist - it's just harder to find a name for what you do. And when you don't have a name, people can't ask specifically for you. So it's hard for you to say, "I fit exactly here."

I've talked about plants being the next step for me, but my instinct says that's only an approximation. Nearly a year ago, I finished my horticulture course, hungry for an interesting yet unnamed combination of things.

When I was 14, I found myself getting on with ordinary life, then stumbling into web. Now, web is ordinary life, and I'm stumbling into this next step. I had no idea what a "web developer" was until I'd already been one for a few years, and I imagine it'll go the same way here. What do you call a plant-tech-craft person? And where exactly can one fit?

I'm pretty nervous. Quite scared, actually. What if I can't afford this? What if there's no place at all for me or the things I want to do? Yet these fears are nothing compared to the fear of waking up 20 years from now, wistful.

So, onward we go.