Enjoying the Third Servile War through Aglianico wine and Spartacus: Blood and Sand.

It all started in the spring of 73 BC, when just seventy-four men, armed with only kitchen knives and skewers, escaped from a gladiator school in Capua and began a two-year, 60,000-strong rebellion against the Roman Republic.

This was the Third Servile War, also called the War of Spartacus, named after the legendary Thracian gladiator said to have led the rebellion.

Some say he fought for freedom and liberty. The Romans feared he wanted to march on Rome itself. Not much is known about Spartacus, the man, or the true motives behind the slave revolt. Oppressors rarely tell stories from the point of view of those they oppress, so whatever we can imagine today, we owe to the extrapolation, interpretation, speculation and imagination of dedicated historians and entertainers. 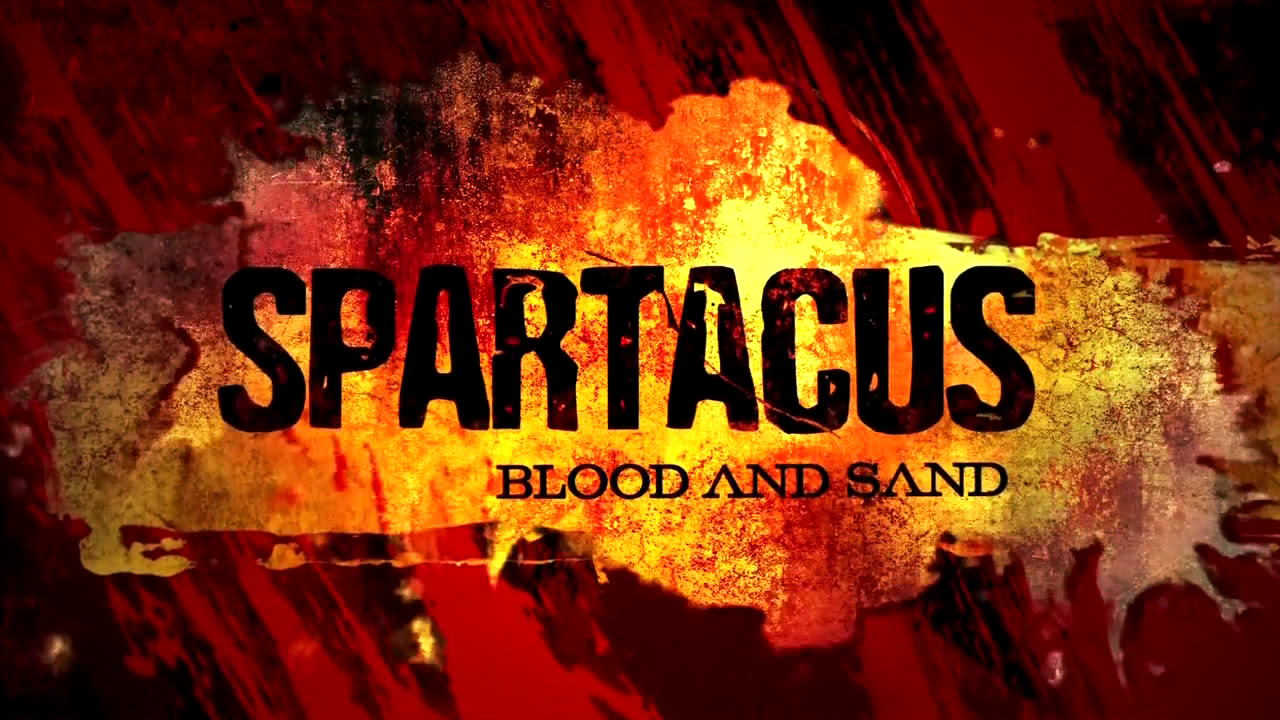 Well, I loved it, anyway. And since I’ve switched my default drink to wine this year, this seemed like the perfect opportunity to learn a little history and explore some appellative delights.

Campania and the Aglianico 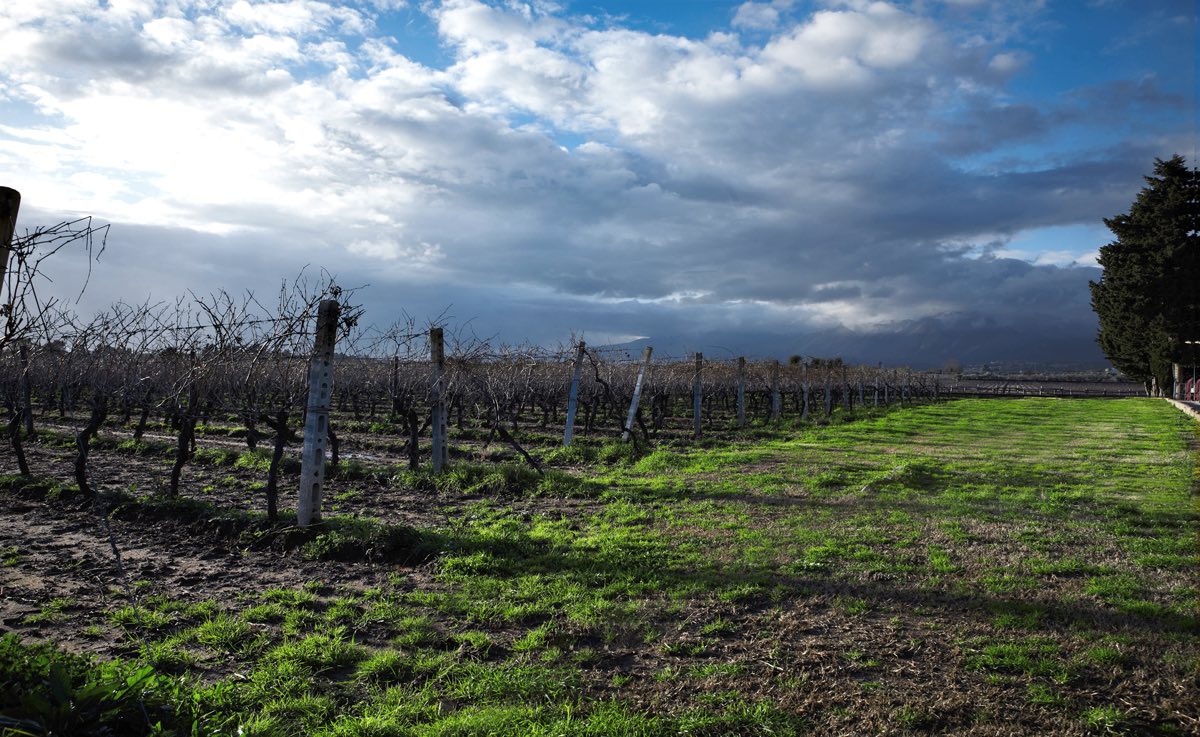 For my first study, I chose a red vino made with aglianico grapes, a variety used for wine since the time of Ancient Rome. This grape thrives in the rich, volcanic soils of Campania, the region of southern Italy that gave birth to the slave rebellion.

By then, Campania was no stranger to conflict. Even before the Roman Republic, this very fertile region was already warmed by the friction between its Osci (Ancient Italian) natives and Cumean (Greek) settlers. Things heated up from the mid-4th century to the 2nd century BC, thanks to five notable wars (the Three Samnite Wars, the Pyrrhic War and the Second Punic War) that frequently saw the Campanian city of Capua in turmoil.

In the years of Spartacus, Campania offered bountiful beginnings for the rebel slaves. The hilly and forested terrain perfectly served their guerrilla tactics. Slave-managed plantations owned by absentee landlords were ripe with new recruits. And forage among the fertile pasturelands yielded plentiful food supply.

To this day, the agro-food industry is still one of the major pillars of the region’s economy. If you buy an Italian nut, there’s more than a 50% chance it came from this part of the country. Other notable exports include mozzarella, olive, fruit and wine.

Of the Campanian wines made with aglianico grape, most are blended with other grape varieties. Aglianico wines tend to be heavy and dry in their youth, so also tend to be aged for several years to let the tannins soften and the fruit flavours emerge.

Founded in the 1970s from a passion for ancient wines, the Villa Matilde winery sits just 40km northwest of Capua, on the fertile lands between the long extinct Roccamofina volcano and the Tyrrhenian Sea. 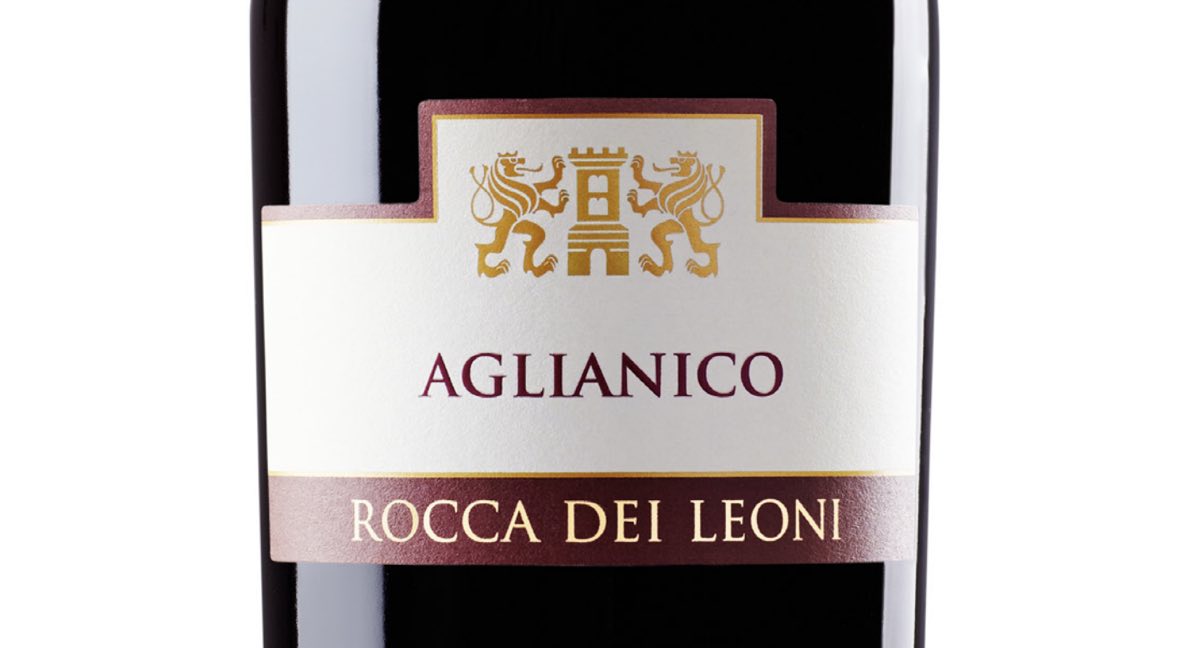 (Bear with me, I’m new.) The dark berry flavour hits first. It’s mildly sweet, but not sugary, with a spiciness I want to describe as “peppery”, though this could be my limited wine vocabulary at work. It feels like it should be a thicker liquid, like cream, which I’m guessing means it has a "dense" body. There’s a shortness to the flavour too; it makes its point and doesn’t linger. Mouthfeel is smooth and velvety kind of like I’m — again, showing my newness to wine — licking suede. I’ve been told this is the tannin. Low on acidity: it’s not sharp, but has that pleasant sourness that all mildly sweet things have. 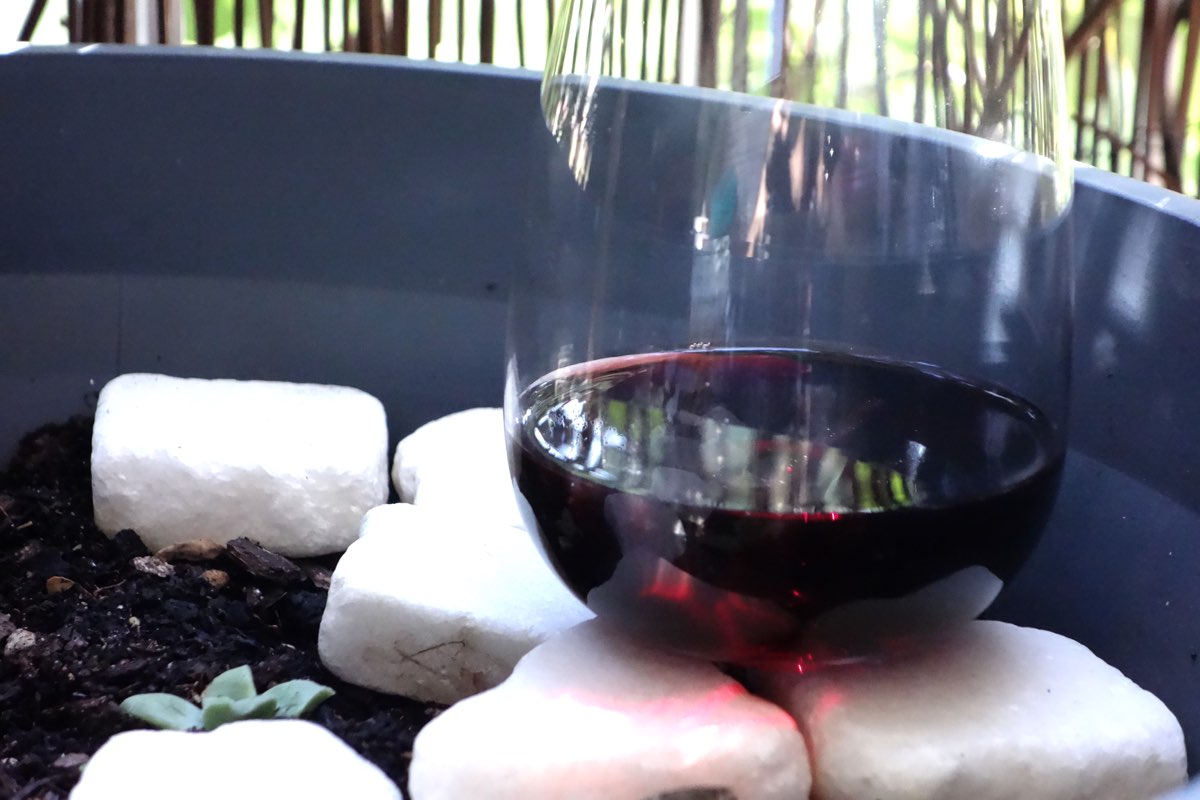 After reading about this wine, I expected it to be a punch in the face, but it was more like a lover cupping my cheek in his warm, strong hand. The taste takes me back to that simple childhood joy of drinking Ribena, but with none of the overpowering sugary-ness that goes with it. 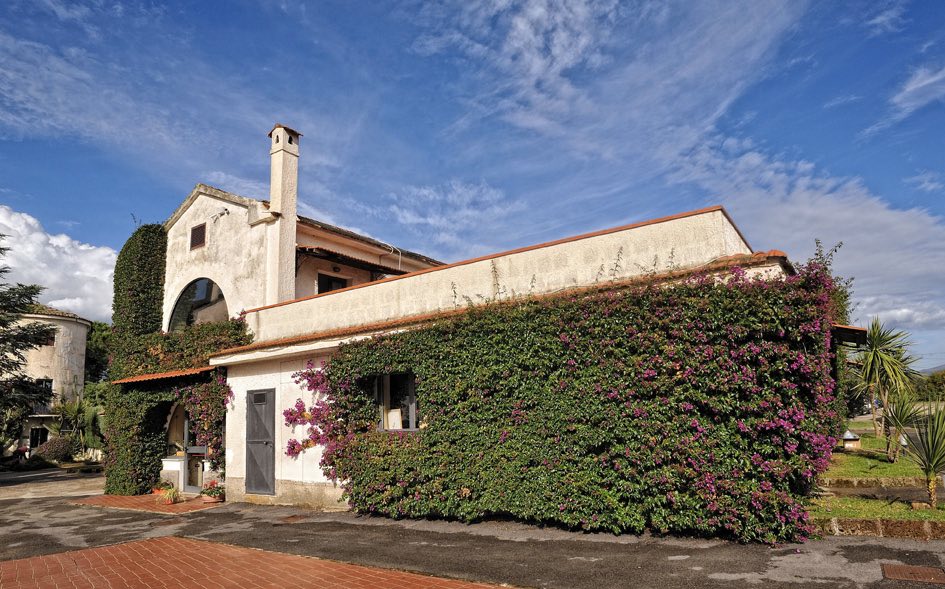 It’s late summer here in Perth and, though I understand the wines were rougher back in Ancient Rome, it’s not hard to imagine some snooty patrician in Capua maybe drinking a wine like this, oblivious to the violent outbreak in the gladiator school on the other side of town. 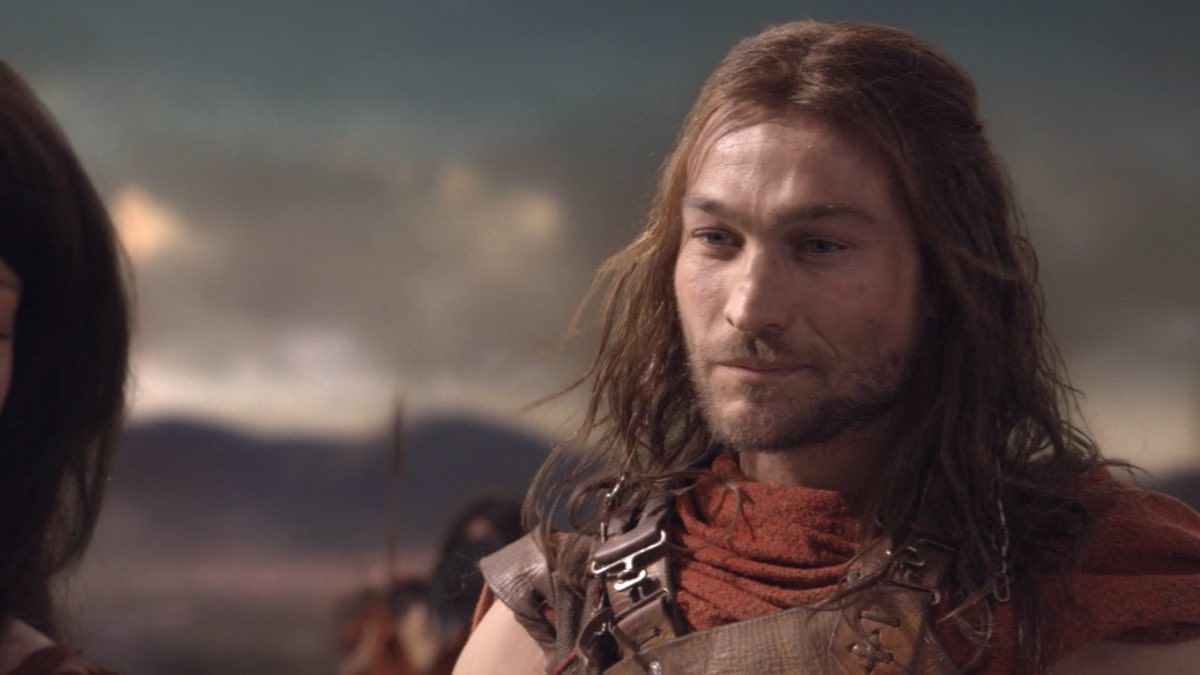 Spartacus is generally known to have been Thracian (from Thrace, ie. modern day Bulgaria). According to The Spartacus War by Barry S. Strauss, Thracians “were masters of the horse” and “had a genius for guerrilla warfare”, which concur with later reports of Spartacus’s activities during the war.

Though it’s been suggested Spartacus’s nationality was confused with the Thraex (meaning “Thracian”) gladiatorial fighting style, Strauss argues that Spartacus probably didn’t fight as a Thraex in the arena “because his owner feared stirring up his slave’s national pride”. Instead, he fought as a murmillo, as portrayed in the show. 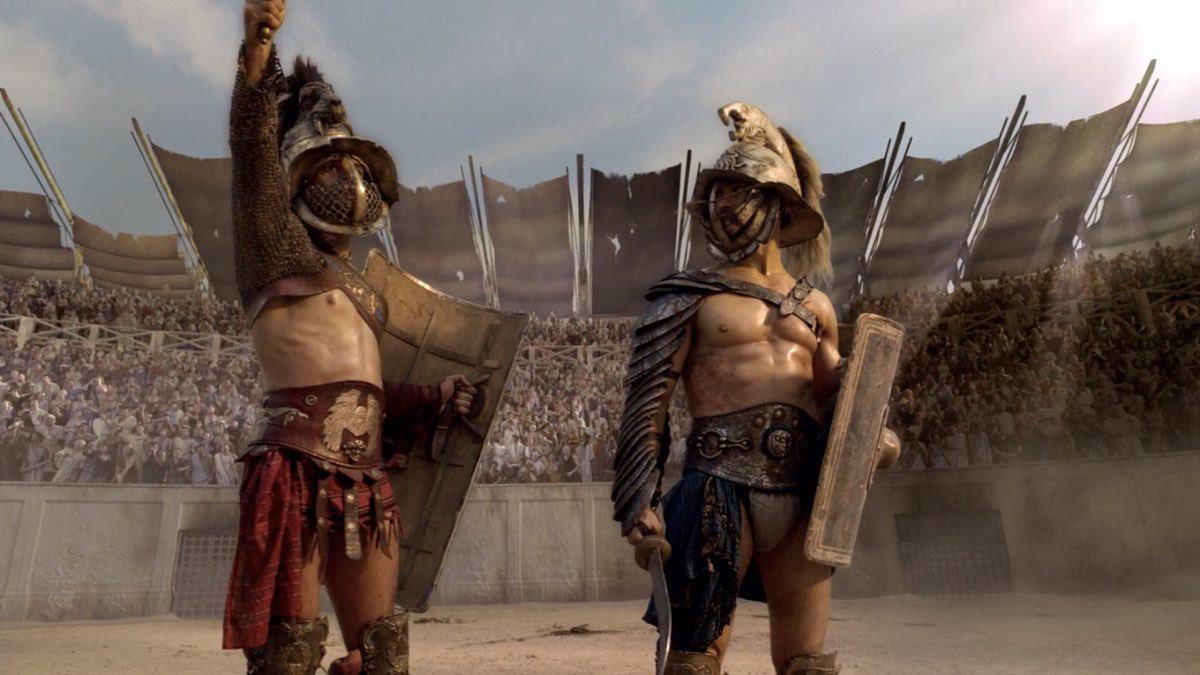 As in the first episode of Blood and Sand (Season 1), Spartacus really might have pissed off the Romans by deserting his post in the auxilia. Parts of Thrace were subjugated by Rome long before the uprising. Spartacus may have been a reluctant recruit in the prevailing war between Rome and Mithridates, later imprisoned and sold into slavery. These events happened fairly quickly in the show, but in real life, could have spanned several years. 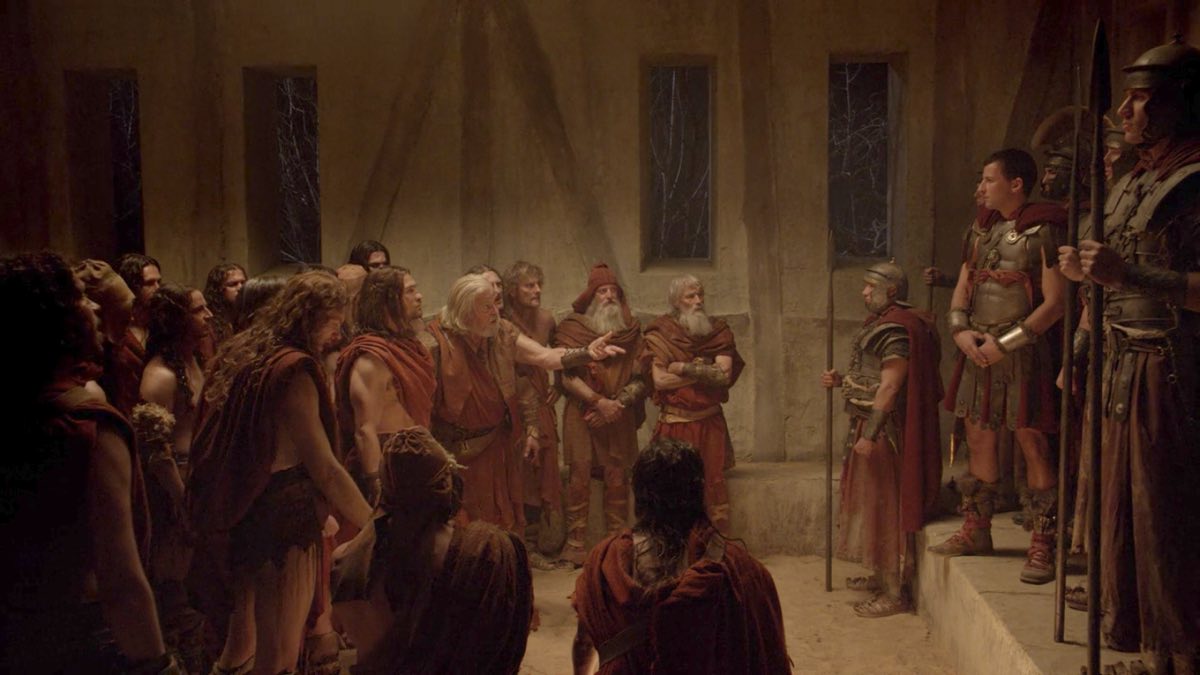 Although Gaius Claudius Glaber is introduced as the Thracian's major antagonist, he “is only mentioned by classical historians in connection with his disastrous military leadership against Spartacus”. He might have had nothing at all to do with Spartacus’s service as an auxiliary in the Roman army or his ensuing enslavement.

The Battle of Mount Vesuvius in Vengeance (Season 3) really did happen, though, as did Glaber’s attempted siege that failed due to the resourcefulness of the rebel army.

From Crassus 9.2 by Plutarch:

But the top of the hill was covered with a wild vine of abundant growth, from which the besieged cut off the serviceable branches, and wove these into strong ladders of such strength and length that when they were fastened at the top they reached along the face of the cliff to the plain below. On these they descended safely, all but one man, who remained above to attend to the arms. When the rest had got down, he began to drop the arms, and after he had thrown them all down, got away himself also last of all in safety.

Glaber’s demise in Vengeance may be no more than creative storytelling, however, as “Roman records make no further mention of Glaber after this defeat. It is not known whether he was killed during the battle, or was simply considered too obscure for further mention by classical historians.” 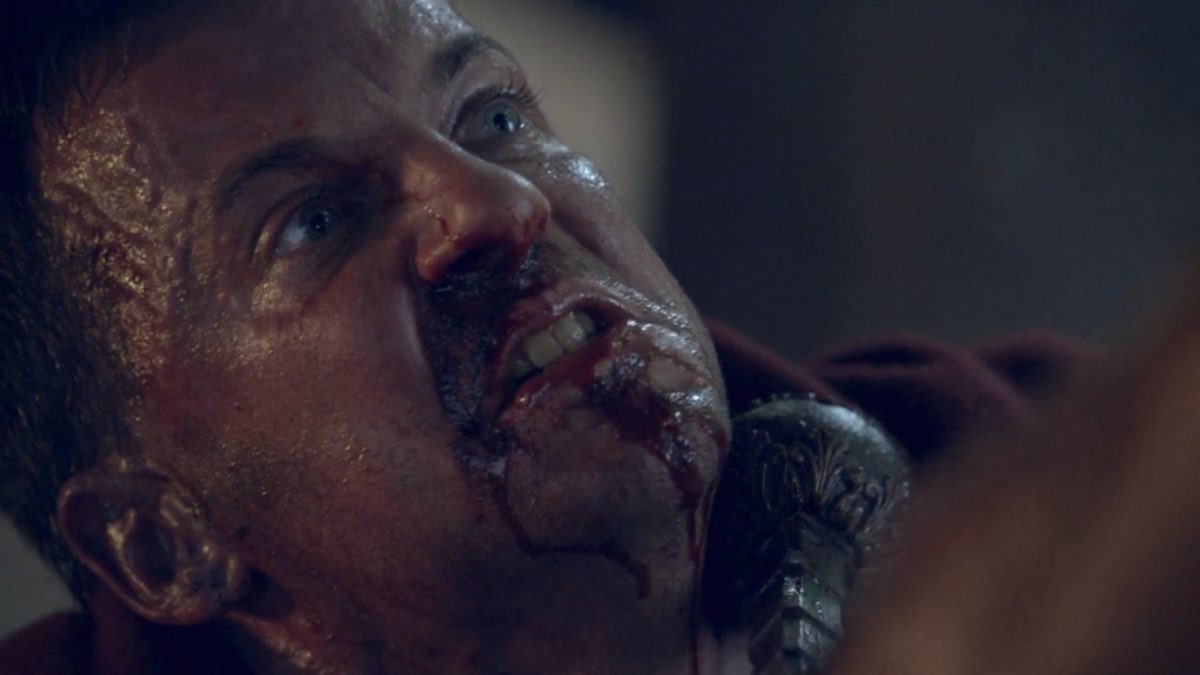 Both Crixus and Oenomaus were said to be Gauls, to which Crixus’s depiction in the show holds true. Oenomaus, however, was portrayed as a Numidian (North African). Crixus was overcome and beheaded in the final episodes of the series, but historical record actually tells of him falling in battle before Rome even dispatched Marcus Crassus.

Agron and Nasir are both fictional, but their relationship may demonstrate real cultural attitudes towards homosexuality in ancient times, ie. society focused more on the power dynamic. 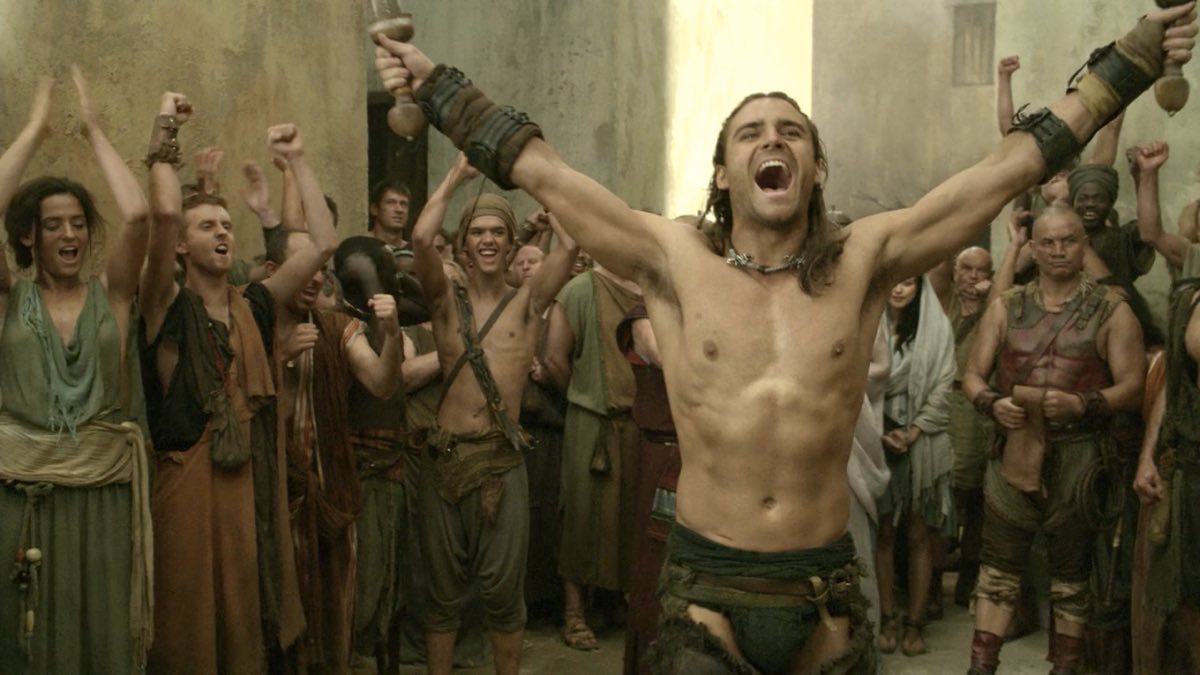 Gannicus did exist, however, and his portrayal as a drunken ladies’ man is in keeping with his Celtic background.

From The Spartacus War by Barry Strauss:

One thing seems likely: few of the insurgents went into battle without first drinking wine. This was standard procedure for both Celts and Thracians and, for that matter, for most soldiers in the ancient world. The Romans faced attackers whose courage had been boosted by the fruit of Rome’s best grapes.

Nothing points to Gannicus being among the 6,000 captured and crucified along the Via Appia after the war, but still, wow… what a powerful end to his character arc in the show. 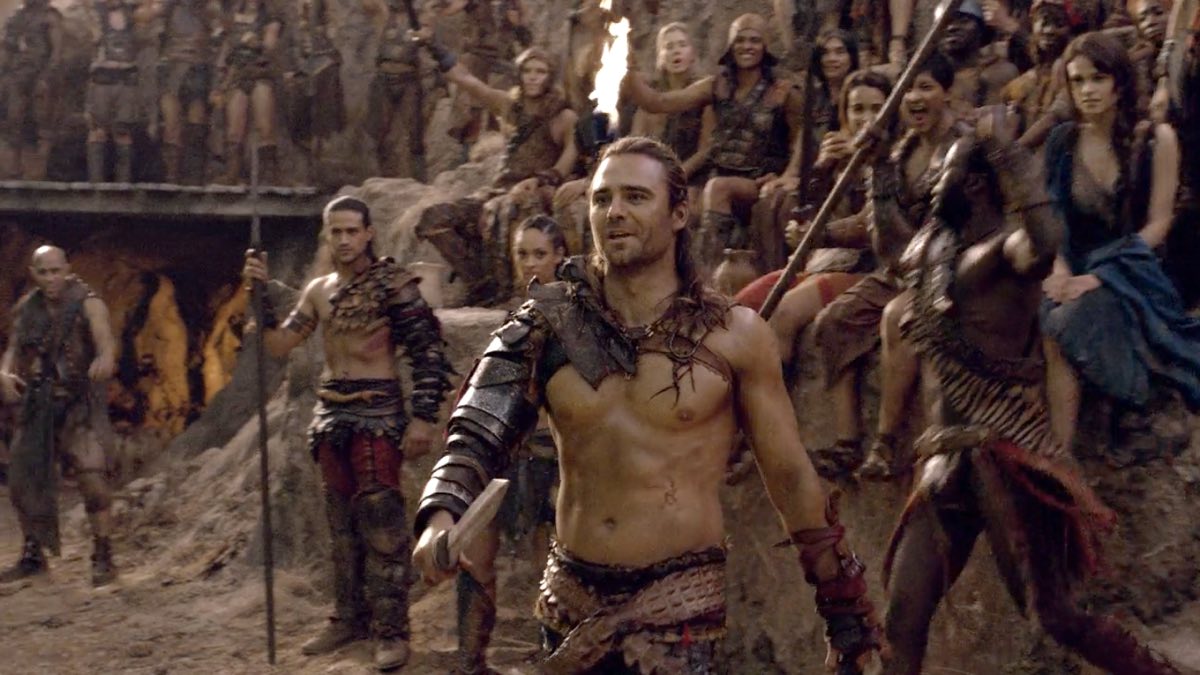 Unlike what we see in War of the Damned (Season 4), the rebels in real life did not conquer a walled city named Sinuessa en Valle, though they probably raided around Sinuessa along with many other non-urban areas of Campania. 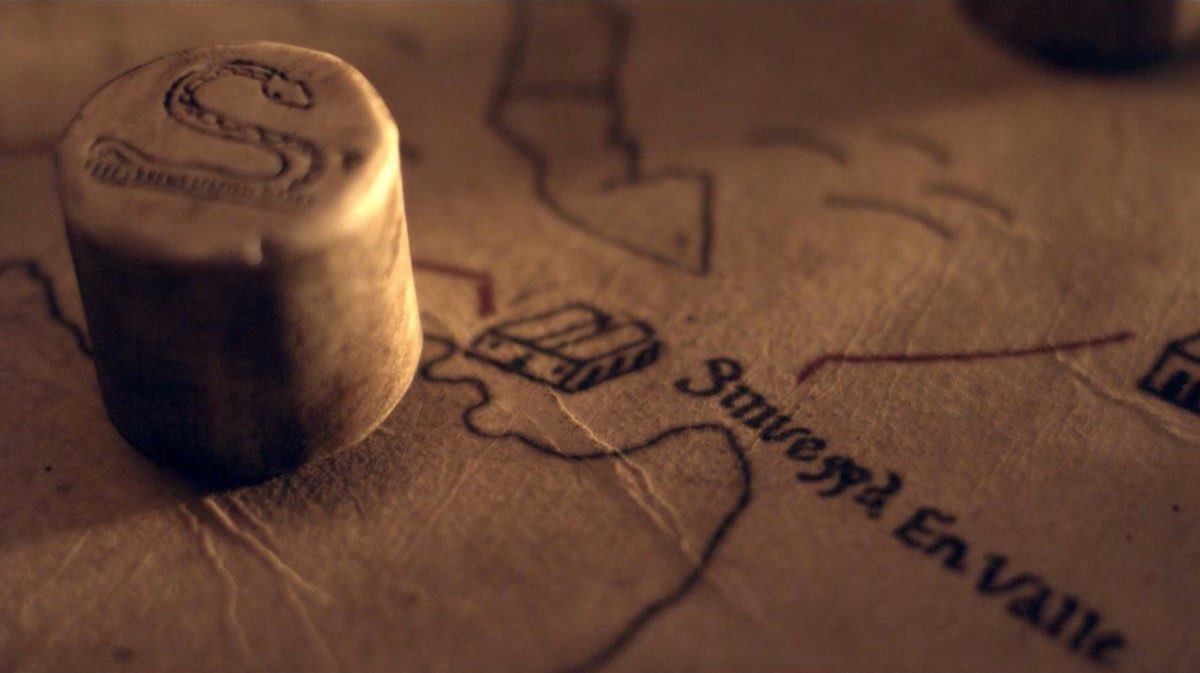 They did eventually conquer a walled city in late 73 BC: Thurii, within a region then known as Bruttium (modern day Calabria).

From Epitome of Roman History 2.8.5 by Florus:

They then attacked other camps, that of Varenius and afterwards that of Thoranus; and they ranged over the whole of Campania. Not content with the plundering of country houses and villages, they laid waste Nola, Nuceria, Thurii and Metapontum with terrible destruction.

Spartacus really did get double-crossed by Cilician pirates, but rather than on the docks of Sinuessa as portrayed in the show, it happened "within sight of Sicily" on "the Italian side of the Strait of Messina".

We don’t know if Crassus really did pay off the pirates, as was suggested in Blood Brothers (S4E05), but it certainly is some clever "history adjacent" storytelling, given that Julius Caesar really had been kidnapped by Cilician pirates just a couple years before the rebellion. 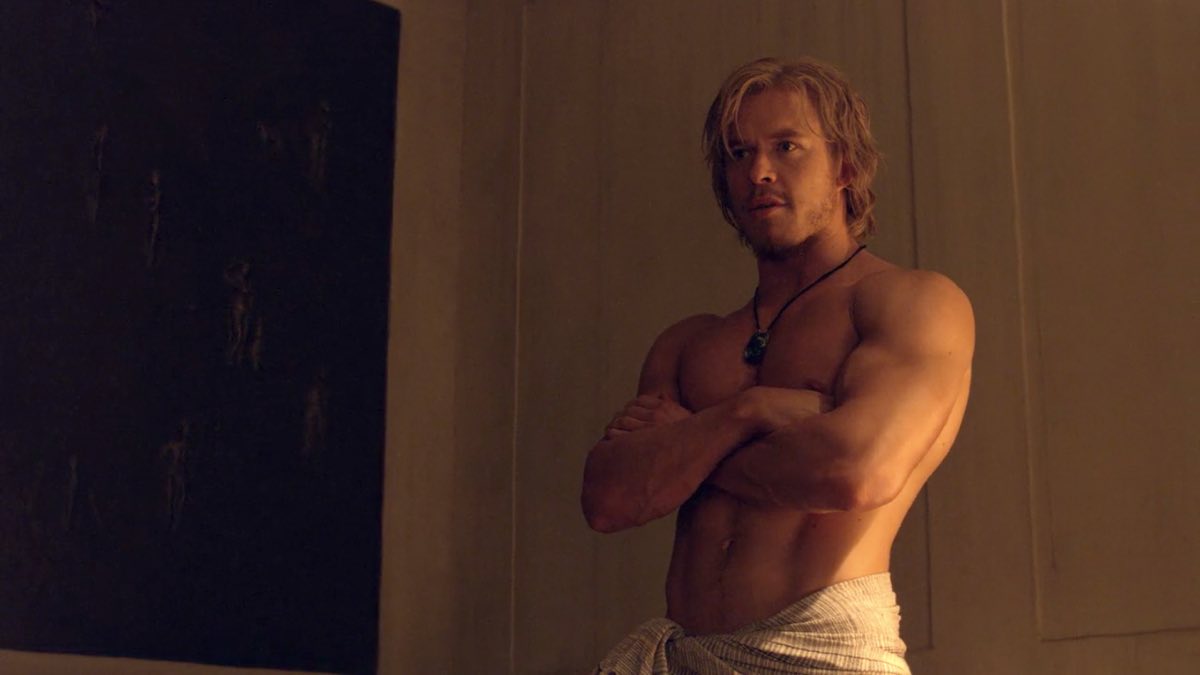 Thank you for reading! I hope you found this as fascinating as I did. If you want to talk history, share interesting links, or tips for tasty wine, just ping me on the socials.